Santorini! I’ve dreamed of coming here since I was 13 and had just finished reading the Sisterhood of the Traveling Pants! It took me a few years but I made it 🙂

When we arrived, we were so grateful to get off the Sea Jet aka a super fast boat that goes from island to island. It’s great that we got to Santorini in good time, but it was a crazy windy day so the jet was not great for those with motion sickness…or really anyone who doesn’t like constant movement haha Also it was quite chilly on Mykonos and the jet so we were praising the Santorini sun 🙂
We got picked up and brought to our hotel, the Central Fira Hotel, which like it’s name was in the center of Fira. It was very cute with only 9 rooms and plenty of room for my roommate and I to spread out. Also they made us breakfast every morning!

Our first and last day in Santorini, we explored Fira. Of course we were central to the shops and restaurants so we went around the circular maze of stores where there were lots of scarves, olive oil and again leather goods! Fira is definitely the hub of Santorini and I can see it being “the life of the party” during the major tourists months. The roommate and I first walked into a spa and had a “kissing fish” experience where we put our feet into water and fish with no teeth exfoliate our skin and do acupuncture. It was such a trippy experience because it was the unknown of the fish “biting” that was scary and then even odder when the fish were actually on our feet. I would do it again, but I’m not sure I felt that different afterwards?

Afterwards we found an amazing view of the Caldera during sunset!! Now this is what dreams are made of ❤

We also found our favorite eatery: The Classico. We ended up here three times in three days because the food was tasty and the view was amazing! I recommend the lamb shank 🙂 ps soda cost less than water so I ended up addicted to Coca Cola x_X 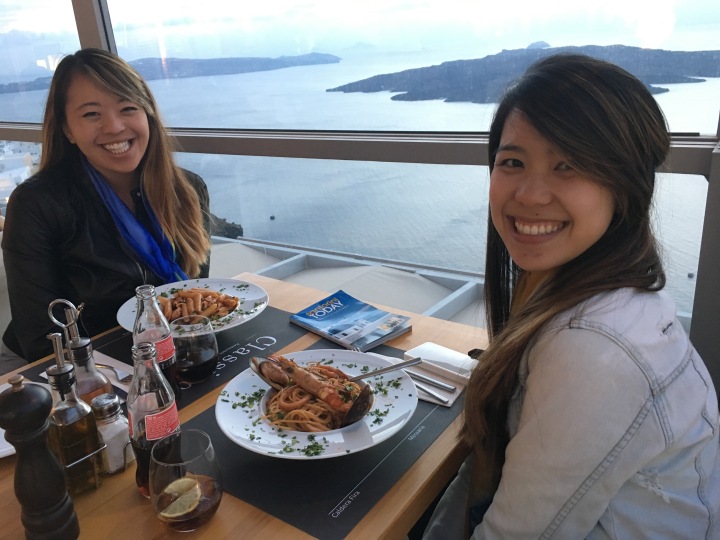 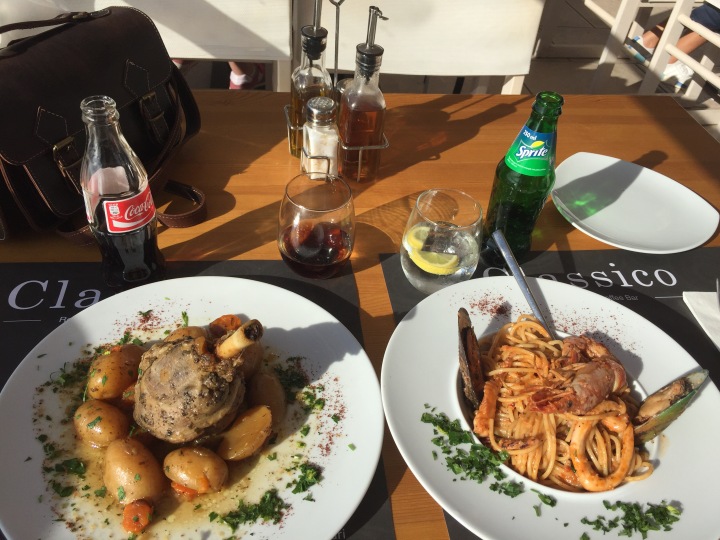 One thought on “Greece: Santorini – Fira”